As Twitter overhauls its interface, here’s what you can expect to see

Noticed something different about Twitter recently? No, your eyes do not deceive you – the micro-blogging site has recently switched all tweets to a new font. It’s called Chirp, and is Twitter’s first-ever proprietary typeface.

However, it’s not the only part of Twitter’s appearance that has been tweaked. Here are a few other aesthetic changes Twitter has announced and starting rolling out on its iOS and Android apps as well as its website.

So, what exactly is ‘Chirp’?

As previously noted, this is the name of the new font – which, in a thread on Twitter’s own Twitter account, the social media company claims makes the user experience “more accessible, unique, and focused on you and what you’re talking about.”

The company originally unveiled Chirp back in January, when Derrit DeRouen, Twitter’s CD of Global Brand, explained that this new font was intended to “be sharp and legible (with good density), but with personality and distinctiveness.”

He added that, when used “at scale for motion”, Chirp needed to be “the life of the party… fun and irreverent… but able to carry a serious tone when the subject calls.” Ultimately, it’s your judgement whether Chirp does tick all of those boxes – but it looks like it’s now here to stay.

How the redesign is aimed at easing eyestrain

Again, your mileage may vary when it comes to how comfortable the new Twitter is to casually peruse – but Twitter itself says that, with all Western-language text on its platform now aligning left, this text has become “easier to read as you scroll.” Non-Western languages continue to align as they did before.

Twitter has shaken up its interface’s colours, too – updating them to be “high contrast and a lot less blue – a change made to draw attention to the photos and videos you create and share.” Twitter also cryptically says it is “rolling out new colours soon, giving you a fresh palette.”

While on the subject of “high contrast”, that’s a phrase Twitter similarly uses to describe its “new buttons” – which have been coloured so that “the most important actions you can take stand out”. For example, ‘Follow’ buttons are now white, but will turn black if you tap or click them to start following someone.

Twitter also claims to have stripped out “a lot of visual clutter”. You might not notice quite as many grey backgrounds and divider lines from now on, while Twitter has also freed up more space to further enhance text legibility. The site adds that yet more visual updates are in the pipeline, too.

The principles of marketing via Twitter remain very much the same

If you already run a marketing account on Twitter, both you and your followers might have to spend a bit of time mentally adjusting to the refreshed UI design.

However, this situation is unlikely to fundamentally affect how either you or your followers use Twitter – and thus how you should promote your brand on it. We can help you in the process, drawing upon our expertise in social media marketing.

PrevPreviousWhy should you give your ecommerce website a ‘mobile-first’ design?
Next5 situations where you should seriously consider redesigning your websiteNext 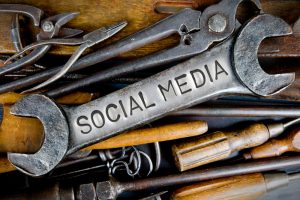 Is a Social Media Reboot on the Way?